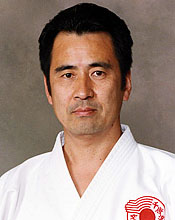 The BC Chito-Kai and the Canadian Chito-Kai are associated to the International Chito Ryu Karate Federation and recognize Soke Sensei as our supreme leader.

Soke Sensei travels throughout all member countries, conducting Chito Ryu clinics and grading sessions at the request of member organizations. We were honoured in the fall of 2003 when Soke Sensei traveled throughout Canada, as head of Chito Ryu, and ended his inspirational tour in British Columbia before returning to Japan.