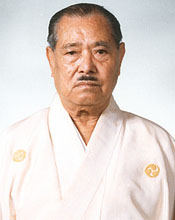 O-Sensei was introduced into the secrets of Naha no Te by the respected fifth master Mr. Aragaki Ou at the age of seven. At that time Mr. Gichin Funakoshi a pioneer of Karate-do on the mainland was also in Naha as a student.

In 1922 O-Sensei went to Tokyo to study medicine, while there he assisted in the opening of Mr. Funakoshi's SHOTO-KAI YOTSUYA dojo. He instructed in kumite and the kata of SEISAN and BASSAI.

In 1958 O-Sensei attained the the rank of Juudan from ZEN OKINAWA KARATE KOBUDO RENGO KAI (The all Okinawa Karate and Weaponry association).

In 1975 he moved his dojo which was known as the SOHONBU (General headquarters) to Tsuboi, Kumamoto City, where it presently exists.

At O-Sensei's death in 1984, his son Yasuhiro Chitose assumed the name of his father , Tsuyoshi Chitose and took on the responsibilities as new Soke