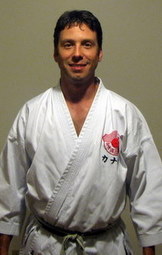 Sensei Gary Sabean has been studying karate since 1985. He achieved his 5th degree black belt (Godan) and his Shihan-level Chito Ryu instructor‘s designation in 2013.  He has been a member of the Canadian National Karate Association (NKA) team for 12 years, and had the privilege of representing Canada internationally for this period. Sensei Sabean earned this honour by becoming a nine-time Canadian kumite champion. Additionally, he was the 2001 World Chito Ryu Karate champion for sparring, and 2004 World Chito Ryu Grand Champion for both kata and kumite.

Sensei Sabean was the Karate Alberta Team Head Coach and NKA Team Assistant Coach from 2006 to 2012. In 2007 and 2009 he won the NKA coach of the year award recognizing his exceptional teaching and coaching ability nationally.

He is trained/certified by the National Certified Coaching Program (NCCP) for the following:

He is also a certified CPR and First Aid practitioner.

In August 2013 Sensei Sabean jumped back into competition and took home the gold medal for team kumite at the Soke Cup World Chito Ryu Championships in Hong Kong.

Through Sensei Sabean’s extensive local, national and international competition and coaching experience, he truly is a role model for aspiring karateka.